Bigg Boss Tamil Vote Results for Season 3 (2019) Polls are provided in this page for viewers to express their support to the contenders in Bigg Boss house.

This is the Third year for bigg boss Tamil, After the great success of Bigg boss Tamil Season 1 with Aarav as the Winner last year 2017 and Bigg Boss Season 2  with riythvika as winner and now season 3 has coming with brand new glow with 15 new Contenders and the show is again hosted by kamal Hassan.

The Contenders in the Bigg Boss House has to nominate two person each. And should give a proper reason for nominating them to eliminate from the house and this process happens every week.

Of which the bigg boss will select the final list of nominees to contest in nomination in that week. And the Public can Vote for the contenders to show their support to that person every week.

The voting happens between monday to friday and elimination occurs in the weekends.

The results of the poll will not be shown to the public and the results will be reviled by kamal hassan on saturday or sunday of that week.

Kavin Eliminated by his own choice and Took 5,00,000 Price Amount

Madhumitha Was Evicted for cutting her hand inside Bigg boss House 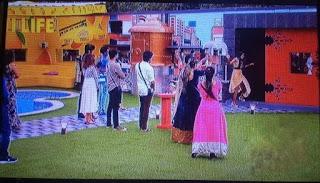 Bigg Boss Tamil is a reality show based on the original Dutch Big Brother format developed by John de Mol Jr. A number of contestants (known as “housemates”) live in a purpose-built house and are isolated from the rest of the world.